Daddy’s cousin, Bill, talked him into letting us raise an orphan lamb from the ag farm. Sharon promptly named him Jelly Beans, J.B. for short. Well, he grew and he grew! Since J.B. was never around other sheep, we think he grew up with the notion that he was one of the dogs. When J.B. got loose he would run around the house and up the old concrete front steps. Then he would bang his head against the front door, trying to get inside to the kitchen where he had been bottle fed. 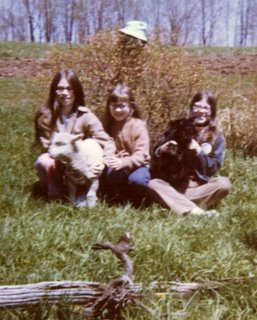 Spring turned to summer and summer turned to fall, and we just could not keep that lamb penned up or fenced in. The final straw came one morning when J.B. escaped as usual but this morning he came running out of nowhere and followed us right on to the school bus! All the children were delighted, but not the driver of the bus who was none other than Bill, Daddy’s cousin, who had talked us into taking care of the lamb in the first place.